By running through Kai Asakura at Rizin 20 on New Year’s Eve, Manel Kape shook up the 135lbs division, scuppered an all-Japanese rematch between Asakura and Kyoji Horiguchi and also scooped the vacant Rizin bantamweight title. The Angolan celebrated his round two TKO by dashing towards the injured Horiguchi, who was working as a ringside commentator, and planting a kiss on his former vanquisher’s temple. He’d announced himself as a major player and sealed it with a kiss.

Kape, 27, is now slated to defend against Hiromasa Ogikubo, who edged a slugfest against Shintaro Ishiwatari earlier in the event to add further intrigue at 135lbs. At the same weight Patrick Mix, visiting Japan as part of the Bellator roster, looked outstanding in taking out Yuki Motoya inside a round with a vicious guillotine choke from a mounted position. Bearing in mind those victorious fighters – not to mention Asakura and Horiguchi – fans of Rizin can now anticipate a series of thrilling rivalries in the promotion’s marquee division.

Kape walks the walk and talks the talk, after all. He gave himself the moniker “Mr Mother******* Champion” during his post-fight interview and also added that he now feels Japanese, having built a 6-3 record in The Land of the Rising Sun while competing on Rizin cards. Not a bad way to endear yourself to a packed-out Saitama Super Arena.

Read the rest of the article at Fighters Only

Weighing up a Kamaru Usman-Colby Covington rematch after UFC 245

Moments before Kamaru Usman became the first man to knock out Colby Covington on Saturday in round five of their UFC 245 welterweight title contest, the outcome was well in the balance. Two judges had it 3-1 either way, while the third judge had it a draw. However, with a minute and a half remaining, Usman sent Covington crashing to the mat with a one-two and forced the stoppage with unanswered ground and pound. Now, though, the fine margins of the result plus the rivalry between the pair have led to calls for a rematch.

You have to feel Covington deserves a second chance, whatever you think about his taunting of just about every fighter on the roster, his bragging of weekends away with models and his labelling Brazil “a dump” after dismantling Demian Maia in 2017. The American protested the stoppage on Saturday, claiming referee Marc Goddard “robbed me of a fair fight.” He gave Usman his toughest fight yet, meeting the champion in the middle of the Octagon with a snapping jab and pesky hits to the body. Let’s also commend Covington on how he soldiered on with a broken nose.

Indeed, the two are beautifully matched and this weekend’s bout was so thrilling that a second meeting should be a possibility. The UFC are renowned for hosting title rematches too, such as Stipe Miocic-Daniel Cormier and Joanna Jedrzejczyk-Rose Namajunas. Plus, rematches create a narrative, help fans become invested and define fighters’ careers. 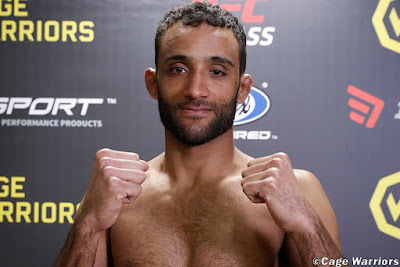 At a time when plenty of fighters fall into debt, depression or drink after retiring, it’s refreshing to learn that Mason Jones, the young Welsh lightweight with his head screwed on, is already planning for the future. “It’s silly to not have an exit plan,” he says. “If you’re fighter who hasn’t been saving their purses and building up savings, why haven’t you? My dad has always encouraged me to look after my finances and if things go to plan I’ll be investing before I retire. Then once I’m done, I’ll have enough money to avoid the 9-5 and not worry about money. I want to have a comfortable lifestyle.”

Jones, though, stresses he’s not in MMA purely for the money. “I’ll get rich one day, I know I’m good enough, but I’m not in it for that. I do the sport because I want to be the best possible fighter, not just for the money – that’s just an aside.”

As well as considering endeavours away from the fight game, Jones has built a record of 7-0 once the cage doors close. The judoka thrilled fans with decisions over the likes of Konmon Deh and Donovan Desmae, hurling combinations at will and chasing advantages from the guard too. Those performances have helped him succeed Jack Shore as Cage Warriors’ poster boy for Wales, and Jones is now deep in camp for his Cage Warriors 108 main event against Aleksi Mantykivi on Saturday in Cardiff.

Read the rest of the article at Fighters Only

Wales stood as one on Saturday night to herald Jack Shore, the unbeaten 24-year-old who displayed poise beyond his years to submit Nohelin Hernandez in his UFC debut in Copenhagen, Denmark. “The Tank” is the fourth Welshman to compete (and win) in the UFC, while he is also the second Welshman to win a UFC contest via tap-out. Now, with bantamweight Shore exhibiting such fight IQ and professionalism against Hernandez, he has laid the path for the upcoming line of Welsh youngsters.

Perhaps the next Welshman to enter the UFC will be another 24-year-old, lightweight Mason Jones, who tackles Aleski Mantykivi on October 12th at Cage Warriors 108 in Cardiff. Perfect as a professional at 7-0, in 2018 Jones wowed fans by trading furious submission attempts during his decision over Konmon Deh. Later, in April, he stood in the line of fire while outscoring the more experienced Donovan Desmae.

An all-action fighter who doesn’t mind getting hit, Jones has taken Shore’s place as Cage Warriors’ main attraction from Wales but it’s worth remembering that the Pedro Bessa student is much more than a YouTube highlight reel. His judo is excellent, his transitions on the mat are decisive and he kicks to the calf, solar plexus and head with an element of surprise. He has already demanded a few excursions as the away fighter, but he might reach the UFC before Cage Warriors can fulfil that.

Read the rest of the article at Fighters Only
Posted by Allyh84 at 08:54 No comments:

Weighing up an Usman-Covington rematch

Do you feel Colby warrants a return?