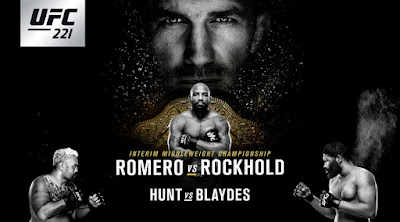 Luke Rockhold and Yoel Romero aim to inject a sense of clarity into the middleweight division on Saturday, when they meet in an interim title bout at UFC 221 in Perth, Australia. (Keep in mind Romero weighed in 2.7 pounds over the limit, so now only Rockhold can win the belt). The 185lbs scene has been in a state of flux since Georges St-Pierre vacated the belt in December, with Robert Whittaker taking Georges’ status as champion and then pulling out of this event with a staph infection. That said and done, it’s now down to Rockhold and Romero to decide who is number one for the moment.

Also at stake is a shot at redemption for Rockhold, who lost the belt in June 2016 when Michael Bisping rung his bell in their ill-tempered grudge match. The Californian returned in November, forcing Daniel Branch to tap out to strikes from back mount, but Rockhold still shipped punches against the fence, emphasising his Achilles heel of lowering his hands and leaving his jaw exposed. When he’s on his game, though, Rockhold is one of the best kickers in the sport, ending Costas Phillippou with a kick to the body in 2014 and demolishing Chris Weidman’s spirit in 2015 by the same means.

Interestingly enough, Romero boasts a similar blend of strengths and flaws. On the one hand, he exhibits the explosiveness of a 100m sprinter, closing the distance with flying knees and cat-like shoots for the takedown. See his knockout of Weidman for one of the most athletic and perfectly-timed flying knees in recent memory. Still, despite his clout and strength, his output plummeted during his five-round defeat to Whittaker in July 2017, casting doubt over his cardio over the championship rounds.


On paper, the outcome lies in Romero’s ability to land clean and land early. A patient starter, the Cuban could take out Rockhold in an instant when capitalising on an opening, potentially finding inroads with leg kicks, then hooks or straight punches. Concentration will be paramount for Rockhold, who is prone to taking his eye off the ball, but if he can slow the pace down and score with his own array of striking attacks – body kicks, jabs and spinning efforts – he can find success towards the later rounds. The real benchmark for either man, however, is Whittaker.

Mark Hunt features in the heavyweight co-main event against Curtis Blaydes, with the Sydney-based Somoan aiming to exploit his frightening one-punch power and grab an 11th career knockout over the 26-year-old up-and-comer. With Hunt, what you see is what you get. Sure, he may have one of the softer physiques in the heavyweight division, but he makes up for that with excellent leg kicks, a measured jab and the unerring ability to send his rivals crashing to earth with one concussive right hand.

Although Blaydes towers over Hunt at 6 foot 4, enjoying a five inch height advantage and an eight inch reach advantage, many of Hunt’s most heralded knockouts – over the likes of Bigfoot Silva and Stefan Struve – have been against taller men. Blaydes nevertheless boasts plenty of physical gifts at the weight. His V-shaped back, broad chest and long limbs bring to mind an image of a heavyweight Jon Jones. He waits for his moments to attack and when he does open up, he switches up the pace with uppercuts on the inside and crafty drives for the takedown.

However, Hunt is the acid test for Blaydes. Genetic gifts aside, the American’s previous three outings were a tame doctor stoppage over Oleksiy Olinyik, a pedestrian decision over Daniel Omielanczuk and a second round knockout over Adam Milstead, later reversed to a no contest when Blaydes tested positive for marijuana. In my eyes, Hunt has the greater fight IQ, and he has the potential to separate Blaydes from his senses in the early exchanges.


Hunt’s sparring partner, Aussie heavyweight Tai Tuivasa, battles on the main card against Frenchman Cyril Asker. Riding on the wave of an 8-0 entry into MMA, the former pro boxer explodes with high kicks and flying knees which belie his brutish physique. He cut down Rashad Coulter with ease in his UFC debut in November, picking him man apart with leg kicks and a devastating aerial knee to finish matters. Asker, a Brazilian jiu-jitsu brown belt, is perhaps more well-rounded, possessing intuitive guard passes and nimble movement, but it remains to be seen if he can swim in deep waters with a bigger man such as Tuivasa.

The fourth bout on the main card pits home country hero Jake Matthews against China’s wild striker Li Jingliang. Matthews looked like a world class prospect when winning four of his first five bouts in UFC, but he has slipped to 1-2 in his last three. As such, his reliance on takedowns and sneaky combinations may not be enough for the more explosive and versatile Jingliang. The pay-per-view offering opens with a 205lbs thriller between Tyson Pedro, Tuivasa’s brother-in-law, and Saparbek Safarov, a rusty-but-exciting Russian prospect. Although Safarov can stand and bang for days, Pedro’s striking, honed at Jackson-Winkeljohn, should help him see out a convincing decision or a late stoppage.

Another sleeper for fight of the night, on FS1 Prelims, is Damien Brown against Dong Hyun Kim at welterweight. Brown is a let-it-all-hang-out kind of fighter, marching forward with his guard up, exchanging fiery hooks and uppercuts with a grin on his face. Watch his back-and-forth slugfest with Frank Camacho for further proof. Kim, a judo black belt who is also willing to take risks, is by far the sturdier man, though, so I expect him to edge this one of the cards.

Elsewhere on FS1 Prelims, there’s a middleweight scrap between Rob Wilkinson and Israel Adesanya, a featherweight dance between Alexander Volkanovski and Jeremy Kennedy, and a flyweight tussle featuring Jussier Formiga and Ben Nguyen.

Meanwhile, UFC Fight Pass Early Prelims holds British interest, with trailblazing lightweight Ross Pearson meeting Japan’s former DEEP titlist, Mizuto Hirota. It’s fair to say both men’s heydays are behind them, but “The Real Deal” will enter as favourite thanks to his varied arsenal of kicks and well-schooled jab. The key for Ross will be footwork, volume of strikes and trading on his own terms. The remaining matches on UFC Fight Pass Early Prelims are Teruto Ishihara against Jose Quinonez at 135lbs, and Luke Jumeau against Daichi Abe at 170lbs.

Who do you think will prevail once Rockhold and Romero throw down in Perth? Share your views on Twitter