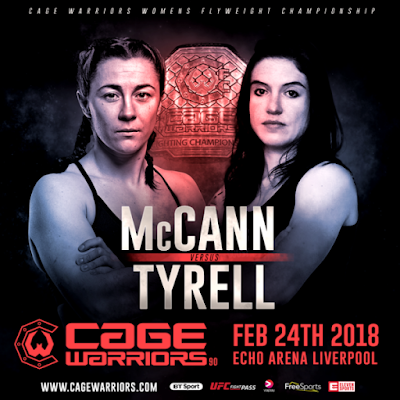 Molly McCann announced herself as one of Britain’s brightest non-UFC prospects on Saturday night, knocking out Bryony Tyrell with relentless punches to lift the Cage Warriors women’s flyweight title. Buoyed by raptures of support at Liverpool’s Echo Arena, McCann worked her way into the fight and eventually rattled off a salvo of straight punches and digs to the body that left Tyrell turning away and in no state to continue. McCann moves to 7-1 and judging by her bravado, exciting fights and prowess on the mic, she looks like a star in the making.

The scouser probed for openings in round one, pumping out her jab and straight punches and catching Tyrell’s kicks. McCann kept her guard up and maintained a high level of activity, but her strikes – more spiteful than her rival's – whistled past their target. Credit to her, Tyrell switched up the rhythm by throwing leg kicks and question mark kicks. She also offered different looks, switching to a karate stance and landing her side kick.

However, by round two, McCann’s sturdier frame at 125lbs and superior power took its toll. The Next Generation MMA stand-out surged in with hooks around Tyrell’s guard. As McCann ramped up the output, ‘Killa Bee’’s defence’s deserted her. Piston straights and hooks crashed into Tyrell’s head. Tumbling forward, Tyrell turned away with referee Marc Goddard waving the bout off immediately.

McCann claimed she wants to defend her title but truth be told, Cage Warriors may find it difficult to find any worthy opponents. Indeed, Kate Jackson is tied up with Bellator, while Cage Warriors’ former leading 125lb-ers – such as Pannie Kianzad and Agnieska Niedzwiedz – are now signed to Invicta. McCann may need another year of seasoning to reach the UFC, but Tyrell, at 38, has perhaps missed her chance.

The co-main event featured a redemptive victory for Norwegian lightweight Alexander Jacobsen, who demolished Lawrence Fitzpatrick in the opening seconds with a looping hook at range. Jacobsen was coming off a defeat to world titlist Chris Fishgold but the Scandinavian looked rejuvenated with his old foe in his corner for support.

‘Bad Romance’ bundled forward with a tirade of punches which barely missed their intended destination. Jacobsen, though, was in no mood to hang around – as the theory goes, if you swing wildly five times, you might land once. That’s exactly what Jacobsen did. His hook thudded into Fitzpatrick’s jaw, sending the Liverpudlian to the canvas in a crumpled heap. Jacobsen postured up beautifully, landing ground and pound at will to put his opponent out of commission.

Also on the main card, German heavyweight Ruben Wolf turned the tables on scouser Shawn Kenny, winning a scramble in round two to lock up an americana. Both men tasted the canvas in a slobber-knocker for the ages, Wolf after a crude hit over the top, and Kenny after fighting fire with fire on the inside. While Kenny edged the opener with the better footwork and combinations, he let the bout slip through his fingers when he gave up side control. Wolf jumped on the americana and as soon as he cranked it, that was all it took.

Paddy Pimblett returned to Cage Warriors in similarly explosive fashion with an arm-triangle over Alex Savvidis in round two of their lightweight collision. The Next Generation MMA man showed all his wit and skill on the mat in round one and he finished the job in the next phase, jumping up for a flying triangle. Once he’d sealed the triangle from the bottom, he heaved pressure onto the point of the elbow and earned one of UK MMA’s most memorable submissions.

Speaking of which, Pimblett’s 155lbs team-mate, Elliot Jenkins, also earned a tap with a first round head-and-arm choke over Josh Abraham. Jenkins brought his A-game with smart ground and pound and he never let up once he earned top position. There was another submission for Warrington weltweight Matthew Bonner, who ended Mick Stanton with a rear naked choke in the dying fragments on round two. In the same division Andreas Tricomitis edged past Mark Kinsella via a split decision, while Bobby Pallett undid Dillon Manning in the first session with a head-and-arm choke.

Read about Bryony Tyrell's career in nursing and her thoughts on Brexit in Alistair Hendrie Sport's exclusive interview.