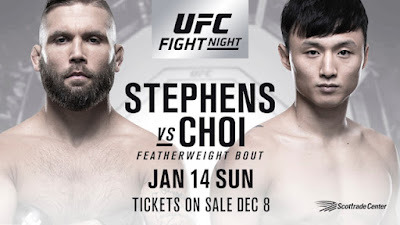 The UFC kicks off 2018 in style on Sunday, as featherweight finishers Jeremy Stephens and Doo Ho Choi throw down in the UFC Fight Night 124 main event in St Louis. The contest is a welcome return for the MMA leader, and both men will look to set off the fireworks they’re renowned for.

Competing out of Alliance MMA in San Diego, Stephens is a dogged veteran with eleven years of experience in the UFC. Owing to his explosive striking and variety of attacks, he boasts knockout victories over the likes of Rafael dos Anjos, Dennis Bermudez and Cole Miller. He uses left-right combinations and well-disguised leg kicks, and like his rival, he enjoys pushing the pace to take his opponents into deep waters.

However, that’s exactly where Choi went at UFC 206 in December 2016, when he fought hell for leather with Cub Swanson before dropping a decision. In a bout that thrilled fans from start to finish, Choi dominated the opener with ramrod lead rights before succumbing to Swanson’s brawling tactics. And, boy, did they brawl. Decked on three occasions, Choi showed heart and endurance to ship tremendous punishment in the final round, even firing back and dishing out his own strikes.

Against Stephens, though, the South Korean should try to avoid circling with his back to the fence. Having already ran through Sam Sicilia and Thiago Tavares inside a round, it will be interesting to see if Choi can assert his crisp one-twos and defend Stephens’ wider punches. Whatever happens, it promises to be a frenetic encounter with plenty of action – don’t expect it to go to the ground, either. Choi should earn a decision or KO with his greater clout.

Speaking of powerful strikers, the middleweight co-main event was meant to feature Vitor Belfort against Uriah Hall. However, the contest was cancelled when Hall pulled out shortly before the weigh-in, stating that his body had shut down. It's another tale of a fighter struggling to handle the weight cut, while Belfort could now face Michael Bisping in London in March.

So, at the time of writing, it looks like Paige VanZant's debut at 125lbs, against Australian boxer Jessica-Rose Clark, could be the new co-main. An economical striker from Team Alpha Male in Sacramento, California, VanZant may have dipped to 1-2 in her last three fights, but the American looked outstanding when stopping Bec Rawlings with a perfectly timed head kick in August 2016.

On the other hand, Clark possesses a broader range of punches and outpointed Rawlings in November 2017. A natural 125lb-er who leads with uppercuts and hooks on the inside, the Aussie should enter as favourite and can box her way to a decision if she stays smart.

Welterweight pair Kamaru Usman and Emil Meek also feature on the main card, with the winner becoming a big player at 170lbs.  Usman, now based at Blackzilians, is renowned for walking his opponents down to seal decisions, while Meek, the Norwegian, is another versatile striker who mixes it up with body kicks and leg kicks. The victor? I’ll be bold and opt for Usman via a barrage of punches.

Heading up the main portion of the card is a featherweight showdown between Darren Elkins and Michael Johnson. All things considered, it promises to be a fan-friendly fight. Elkins thrives on adversity, as shown by his thrilling comeback over Mirsad Bectic in March 2017, while Johnson put on one of the fights of 2017 with Justin Gaethje in July, eventually succumbing to “The Highlight”’s pressure in round two. The smart money lies with Johnson.

Before that match, on UFC Fight Pass Prelims, two lightweight battles take place with James Krause going against Alex White, and Matt Frevola squaring up to Marco Polo Reyes. There's a bantamweight dance between Talita Bernardo and Irene Aldana, while Kyung Ho Kang and Guido Cannetti lock horns to move up the featherweight rankings. Elsewhere, Thiago Alves against Zak Cummings at 170lbs was also cancelled when Cummings slipped in the bath.

After Choi and Stephens have traded punches in the Octagon, head straight back to Alistair Hendrie Sport for the latest reaction.