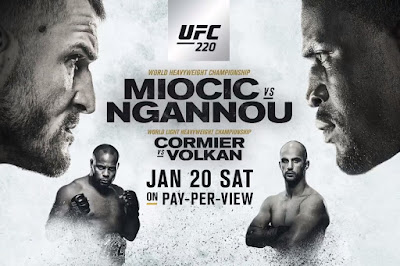 One of the biggest heavyweight title fights in UFC history takes place on Saturday at UFC 220, as world leader Stipe Miocic must overcome Francis Ngannou to hold onto his belt at the TD Garden in Boston. If the Cleveland native does pull off the victory, he’ll clinch a record third straight defence of his crown. On the other hand, if N’gannou comes through, he’ll complete his destruction of the division and potentially seal an 11th consecutive finish.

Still, considering these two giants are competing for the title of Baddest Man on The Planet, both are as humble as they come. Competing in the UFC since 2011, Miocic, who starched Fabricio Werdum for the belt in 2016, rarely trash talks and was something of a gatekeeper before winning three on the bounce between June 2013 and May 2014. However, what he lacks in talk he makes up for in skills, and in the last three years he’s halted the likes of Junior Dos Santos, Andrei Arlovski, Mark Hunt and Alistair Overeem – a who’s who of legendary big men.

Similarly gracious and respectful, Ngannou, a French-Cameroonian, is another down-to-earth warrior who barely spoke a word of English until 2017. His performances in the Octagon speak volumes, though – he owns stoppages over the likes of Arlovski and Overeem, the latter of which with a left cross from the depths of hell that almost decapitated the Dutchman. Indeed, whenever Francis steps into the Octagon, you can be sure he’s packing dynamite.

The thing about this match-up is, whenever Miocic steps up to the plate – against a defending champion in Werdum, a trailblazer in Overeem, and in a rematch against Dos Santos, who he’d already lost to – he always produces, short-circuiting his rivals with precise jabs and uppercuts after
closing the angles. Whether he’ll take the fight to Ngannou, a concussive striker, is another matter.

The challenger has the potential to separate Miocic from his senses at any moment, particularly with counters and hooks. While fighting on the inside, Ngannou has a knack of connecting on the sweet spot, dumping his foes to the canvas in violent fashion. Mark my words, this bout will be explosive. Making a prediction here is about as reliable as rolling a dice or flipping a coin. Either man could force a stoppage with a well-timed punch over the guard, probably to the side of the head, but I’ll predict an early Ngannou KO.

The light-heavyweight co-main event, between champion Daniel Cormier and challenger Volkan Oezdemir, has a similar feel to the headliner, with the seasoned champion taking on the most dangerous prospect in the division. Cormier owns one of the best wrestling IQs in the sport, taking down his opponents away from the safety of the fence and suffocating them in a world of hurt. Look at the way he dominated Anderson Silva on the mat in 2016, and how he sank in a rear naked choke against Anthony Johnson last year.


Triumphs over Alexander Gustafsson and Dan Henderson also stand out on his track record – as well as victories over the likes of Josh Barnett and Antonio ‘Bigfoot’ Silva up at heavy – but he is still vulnerable to head kicks, as evidenced in the second of his defeats to Jon Jones in July 2017 (later reversed to a no contest when Jones failed a drugs test.)

As such, don’t be surprised at all if Oezdemir feints low and aims high with kicks. The Swiss burst into the UFC in February 2017, outpointing Ovince Saint Preux before stiffening up Misha Cirkunov and Jimi Manuwa with vicious knockouts. After running to 3-0 in the UFC, with scalps over a former interim title challenger and two more top ten pacesetters, Oezdemir has enjoyed a formidable start to life in the world’s biggest promotion. Like Ngannou, he can end matters in the blink of an eye, and is also comfortable throwing knees in the clinch or stepping into the line of fire throwing combinations.

What makes Oezdemir such an intriguing opponent for Cormier is his clout, of course, but more so the fact that we haven’t seen his takedown defence yet. How will the underdog defend against Cormier’s ankle picks, double-leg takedowns and high-crotch entries? It’s an opportunity of a lifetime for ‘No Time’, but I believe Cormier’s intelligence and game-planning will help him see out a decision.


The pay-per-view offering also features a featherweight showdown, Calvin Kattar against Shane Burgos, which is low on star power but sky-high on entertainment value. Both men hurl a broad selection of strikes, Kattar from the outside and Burgos with his trickier boxing, while Burgos could gatecrash the top 15 with a win here. The New Yorker increases his output throughout the rounds and uses head movement to befuddle and frustrate his opponents. He can dominate here, boxing his way to a slick decision.

Further down the card, a 205lbs dance between Gian Villante and Francimar Barroso should provide an interesting clash of styles. Another New Yorker, Villante attacks with his heart on his sleeve whereas Barroso pounces on mistakes and enjoys countering in the pocket. If Villante lands early, he could turn this into a brawl but I see Barroso inching it on the cards.

The pay-per-view broadcast begins with Brazilian bantamweight Thomas Almeida tackling America’s long and rangy Rob Font. Although both men can stand and bang and endure punishment, I reckon Almeida’s variety and creativity, especially with knees up the middle, will see him home and dry.

Meanwhile, UFC Fight Pass Prelims offer a pair of featherweight bouts between Kyle Bochniak and Brandon Davis and Dan Ige and Julio Arca, not forgetting a 125lbs showpiece between Dustin Ortiz and Alexandre Pantoja and a welterweight tear-up pitting Sabah Homasi against Abdul Razak Alhassan. For those looking forward to Early UFC Fight Pass Prelims, the evening starts with Matt Bassette versus Enrique Barzola at 145lbs, and Islam Makhachev against Gleison Tibau at 155lbs.

After you've soaked up the heavyweight title barnburner and the rest of this weekend's card, head back to Alistair Hendrie Sport for the latest reports and reaction.