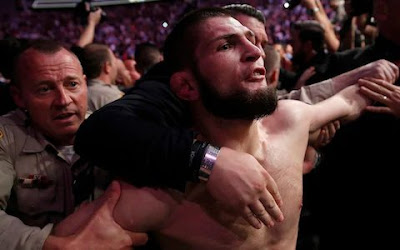 Khabib Nurmagomedov has to deal with the consequences of his part in Saturday’s brawl at UFC 229. After submitting Conor McGregor to keep his lightweight title, the Russian lost his mind and leapt out of the cage, attacking McGregor’s teammate Dillon Danis and causing an ugly melee of pushing and shoving and punching and kicking, all in plain view of Nevada State Athletic Commission representatives, UFC top brass, broadcast colleagues, and the watching world. The 30-year-old’s father Abdulmanap, a ruthless disciplinarian, has already condemned his son’s actions, and now it’s up to the NSAC to make an example of Nurmagomedov and punish him accordingly.

UFC president Dana White, speaking to TMZ Sports, claimed the NSAC should fine the titlist $250,000 –around an eighth of his $2m purse– and suspend him for between four and six months. The fine seems about right, but the suspension isn’t enough.

After all, Nurmagomedov aimed a volley of strikes at another man, something which could have left him in jail if this occurred on the streets. He initiated a fracas involving perhaps 20 to 30 people, and with such bad blood between the two competitors, not to mention both sets of boozy fans, the last thing the event needed was more animosity and the heightened potential for skirmishes in the crowd. Frankly, Nurmagomedov made a foolish mistake –completely out of character, I might add– and left a black mark on his and the UFC’s brand.

Furthermore, this is a guy who has fought only five times since dominating Rafael dos Anjos in April 2014. Although the NSAC is unlikely to consider Numagomedov’s level of activity in the octagon when handing out its punishment –why should it?– the guilty party wouldn’t shoulder the burden of his actions with a ban of four to six months. The sambo specialist needs to discover that what he did was a disgrace and in light of that, a suspension of nine months or so would be adequate.

That kind of ban, just over double what White proposed, would force Nurmagomedov and the rest of the roster to sit up and take notice. It would help the commission state that, if ever it needed to, vaulting out of the fighting space and attacking members of an athlete’s camp –hell, anyone for that matter– is in fact not OK. There’s no place in the sport for that kind of behaviour and the commission needs to underline that sentiment.

Once the NSAC deals with Nurmagomedov, what else could the UFC do? White told TMZ Sports that he’d consider stripping the 155 lbs linchpin if the ban is lengthy enough, but he also said at the UFC 229 post-fight press conference that he’s reluctant to add to any punishment that the NSAC might administer.


That’s a bit contradictory when you look back to when Paul Daley sucker punched Josh Koscheck after their grudge match at UFC 113 in 2010. Back then, White slammed, shunned, and threw Daley out of the UFC with no questions asked. Still, you’d be a fool to think that the UFC doesn’t thrive upon drama and weighty numbers, and you’re living a lie if you think the UFC has enough balls to kick Nurmgomedov out.

By dropping Nurmagomedov, they’d lose out on plenty of pay-per-view buys. He grinds for the finish, he’s improving as a trash talker, and added to that, most importantly, he’s one of the pound-for-pound best fighters in the world in the most exciting weight class in the sport.

Nurmagomedov will live to regret his decisions at the weekend, though, whatever punishment he receives. He’ll have to bear the brunt of the NSAC while his father will also offer him a shellacking for making a mockery of the humble and respectful values his family drilled into him as a young Muslim. None of this is to say that the winner of UFC’s 229’s main event was the only man at fault –Conor McGregor punched one of Nurmagomedov’s camp during the chaos– but it’s time for Nurmagomedov to swallow his pride and accept whatever reprimand is coming his way.